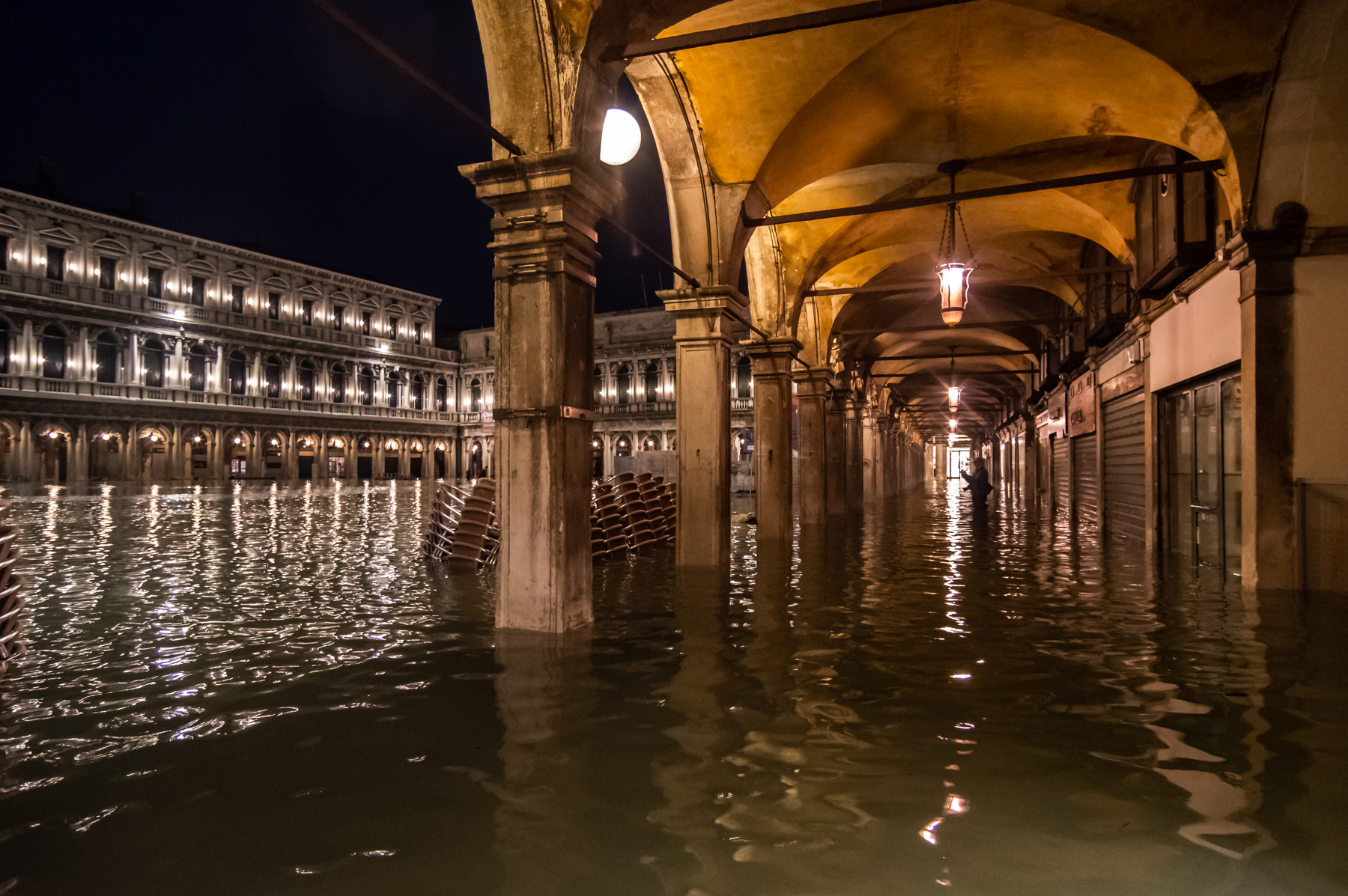 In the beginning before sinking forever, punished by the gods for it’s excess of pride, Atlantis must have been more or less like this. With glittering shop windows, cosy tavern dining rooms, which we call bacari, the halls of hotels, which gradually turned into aquariums. Floating mannequins, diners standing up on their chairs, piles of papers soaking in offices, calli transformed into streams: we like Venice when it is Carnival time, with the fireworks of Redentore, with the celebrations of the Biennale and the Film Festival, but now it is a semi-submerged, solitary city that was documented by the photographer Davide Busetto. While it’s citizens and tourists flood the web with instagram stories, he walked through the sinking city in the late evening of the 12th, donning waders, a cape and his faithful Pentax. 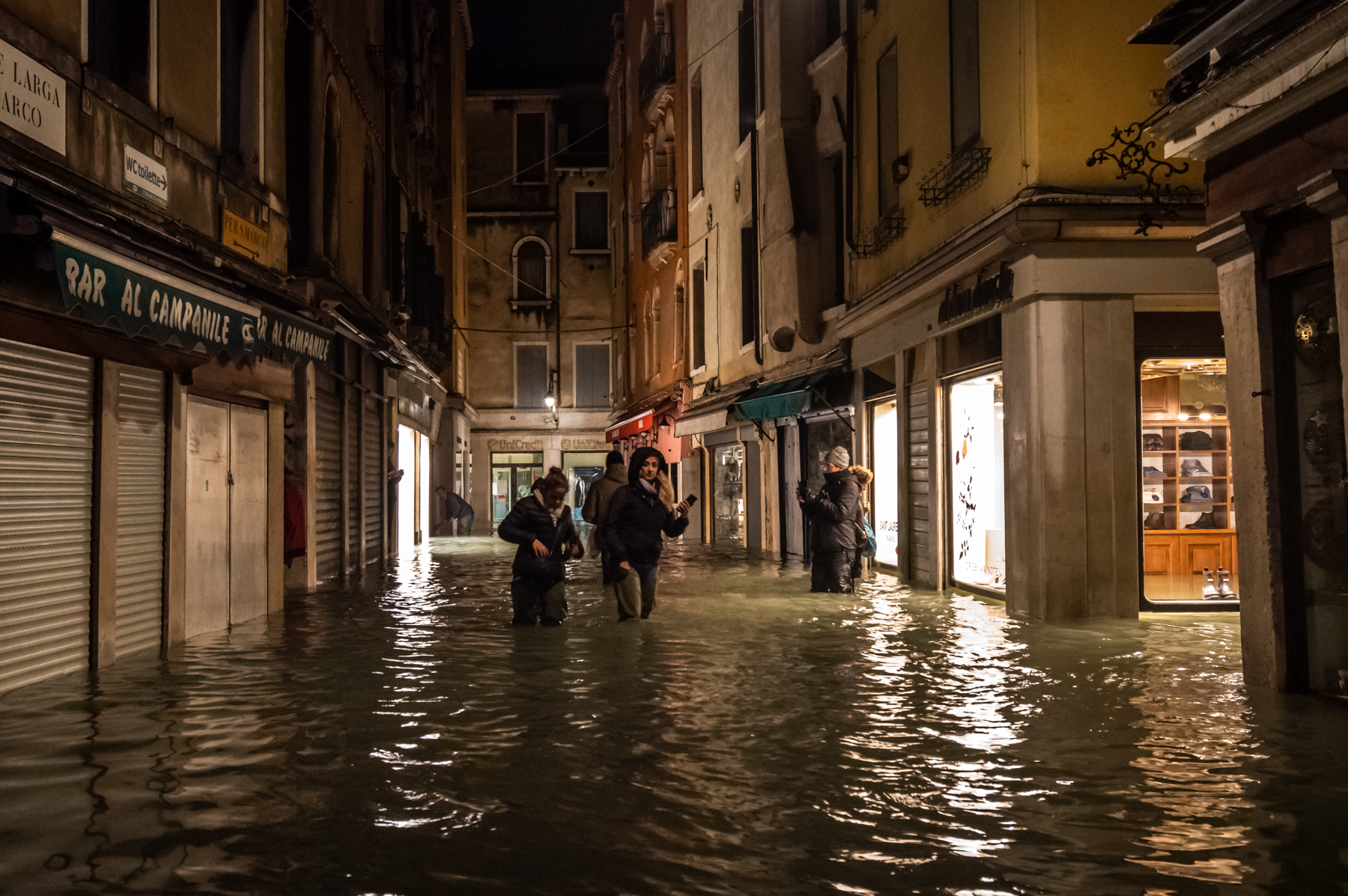 We often become witnesses of historic events by pure chance, or almost: «Originally» explains the photographer «the idea was to go to San Marco to do a series of shots of high water. Forecasts were 145cm. Last year, with a slightly higher tide, I had not encountered any particular problems in moving around ». As he got closer however, on the boat from Piazzale Roma towards Rialto, Davide Busetto received a notification from the tide centre, that the increasing estimate of the evening’s peak level was now 160 cm (with risk the water could rise again) «When I arrived at Rialto everything was so different from usual. The sirens were in continuous alarm and the walkways were already almost unusable. We walked towards San Marco against the current: the streets were flooded by rivers that brought the water to the interior of the city. The wind was extremely strong, the shutters flapped constantly and the first emergency electrical systems kicked in. The city became, second by second, increasingly dark and dangerous “. 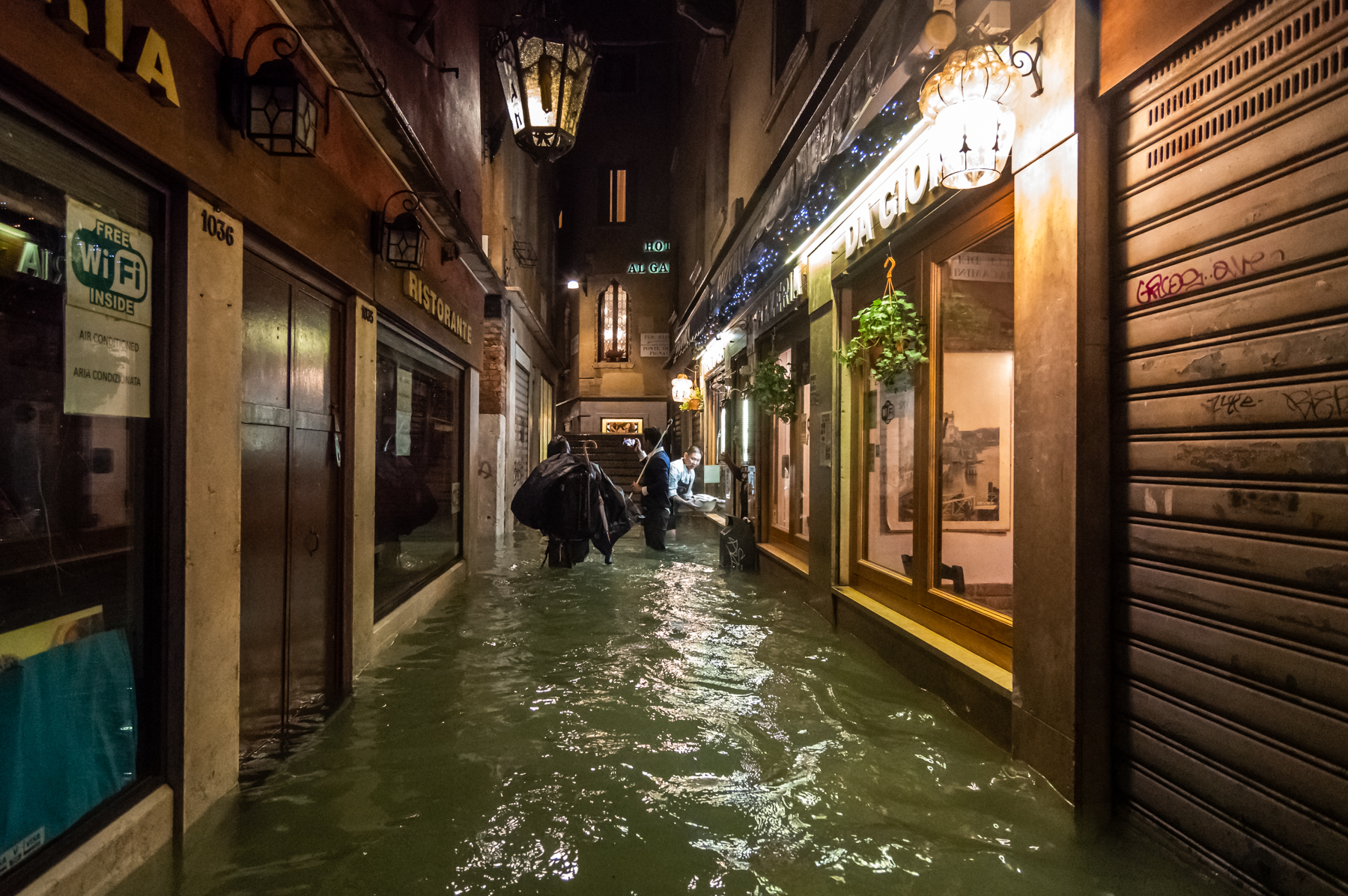 “Aqua Granda” was the name given to the flood that struck Venice on the 4th November 1966. The tide of that day reached a record 194 cm above normal sea level. Fifty-three years and eight days later the water reached 187 cm. «Aqua Granda, the second act». But nothing has changed. For half a century it seems that a great theatrical comedy has been staged: the pathos and love for the great beauty of the Serenissima betrayed by fraudulent factions performing in the shadows, while all around is a great shouting of scientists, scholars , committees, commissions, chieftains, gang leaders, dissidents, and scammers, comprising of promises, complaints, inquiries, warnings, partitions, laws, regulations, comments, editorials, diatribes, double talk, gibberish! The popular playwright Carlo Goldoni could not have written it better. But all this buzz last night was drowned out by the hiss of the wind, the continuous breaking of the waves, the slamming window shutters, the hulls of the ships that broke the stone banks to the continuous ringing of alarms. A chilling, grim and gloomy soundtrack, but tremendously real. 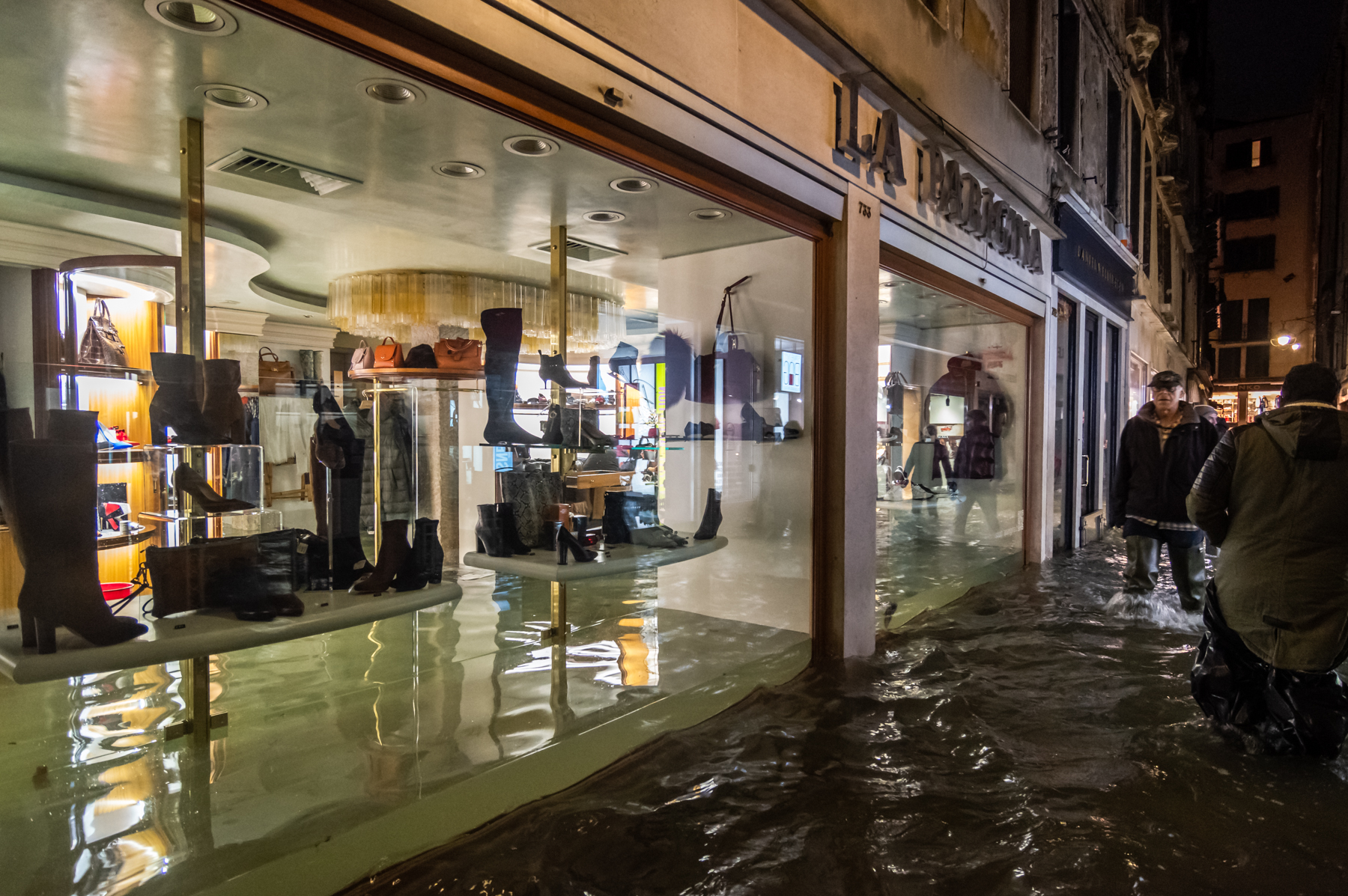 Taken from the site of the municipality the tidal phenomenon is declassified thus, almost as an exotic attraction: «As a rule, it is sufficient to wear a pair of rubber boots; the water buses service will continue, modified at times, some routes adjusted, but ensuring access to almost the entire city. You can still reach on foot the main places of the city thanks to the raised pedestrian paths ». This time it was not like that. Toilets throwing up water, motorboats jammed between the houses, a mayor speaking from the flooded square nervously shaking his head “we declare a State Of Calamity”. Internet streaming keeps us constantly updated. But being there, in the drowned maze of streets that approach the large swimming pool that is now Piazza San Marco is quite different. 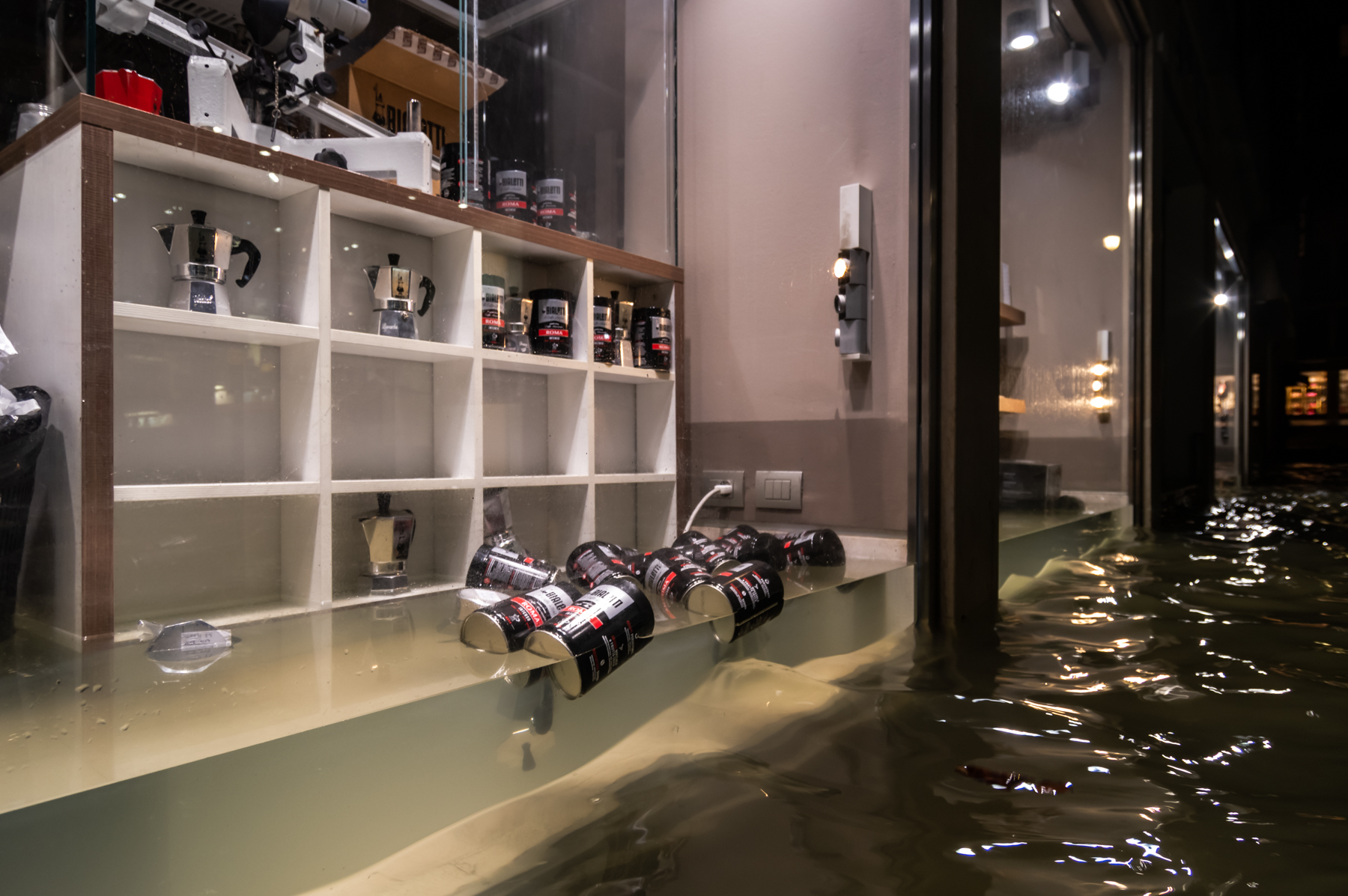 With 187 cm, the height of a basketball player, Venice is completely “disoriented”, deprived of the basic liveability that ensures it fame, prosperity, and wealth. It is no longer a town but a ghost of one. Millions of euros worth of damage. It was more than fifty years ago when the disastrous flood hit. Then the response was to enact special laws, pumping funds of billions of lire and euros into the Mose , catapulting the gaze of the whole world onto the lagoon, today we still find ourselves dealing with the same fate. The water of these last day’s exceptional tides does not wash away the sins, it splashes them in our face. 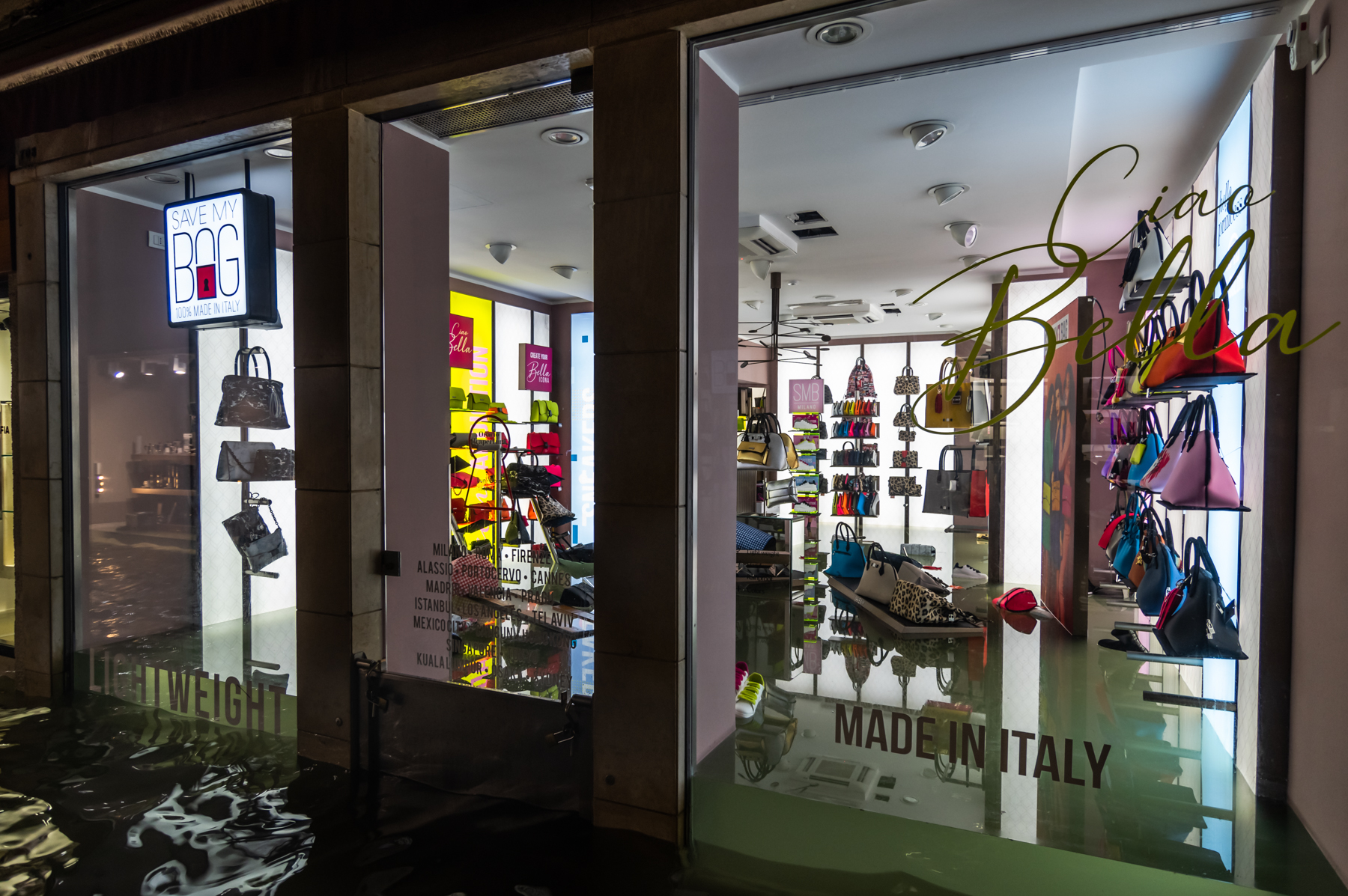 It is all too easy to read Davide Busetto’s images as an allegory of unbridled consumerism set adrift. Masks, bags, puppets, souvenirs and various objects that float in broad daylight in the doorways of boutiques of a large medieval mall. The problems of Venice are enormous: a sea level that rises to a planetary extent in a city on stilts that sinks slowly, year by year. The question of its destiny is one that nobody wants to answer. Just as when the Titanic was descending, we remain flawless, unfazed and unsinkable in a final desire for dignity. But what use is dignity in the face of these events if we continue to consider Venice as a brand, a consumerist’s sponge to be squeezed dry without respecting its balance? For now, at the very least may Poseidon be pitiful. 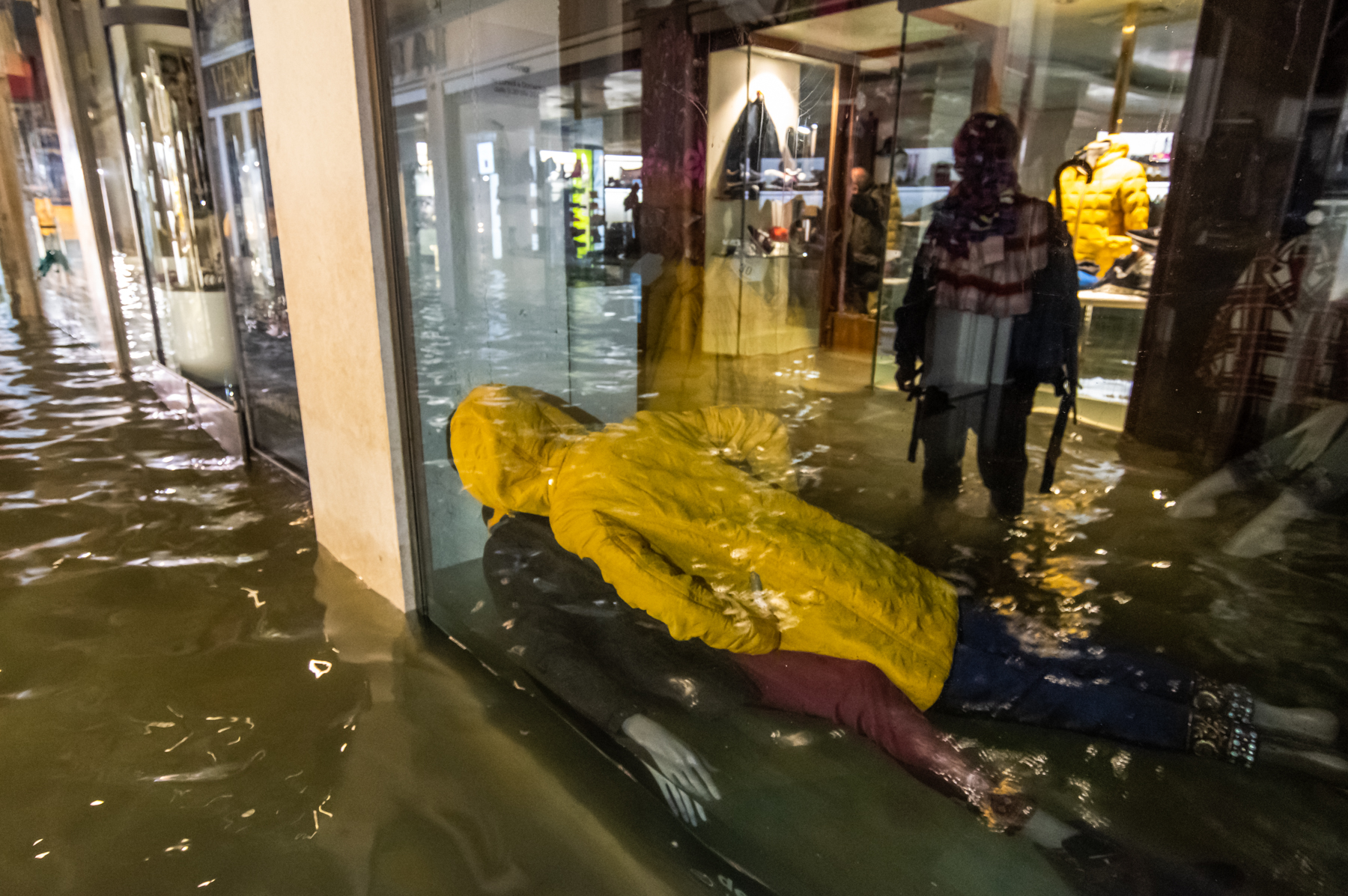 House of Ronin arriva in Chinatown