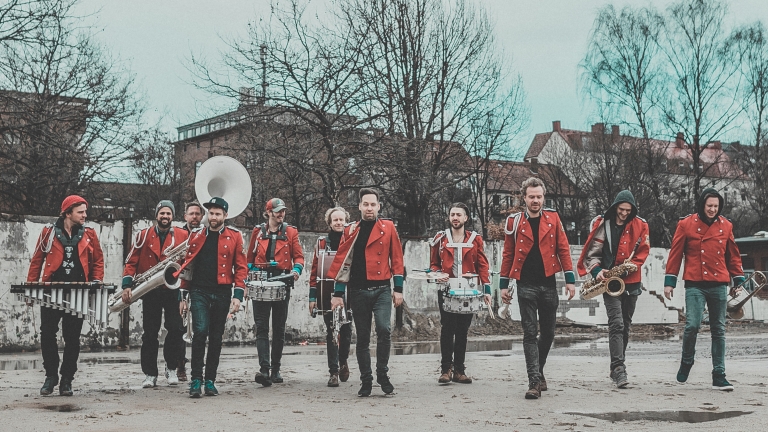 I have been waiting for this concert as though it were payday. Finally, in Milan, it’s the techno marching band that has gladdended the hearts of DJs, clubbers and music lovers from around the world: Meute!
I loved this roaming band from the first time I saw a video of them playing out in the street among the crowds. Meute have found a new arrangement for the tracks that we serious clubbers are now hopelessly attached to. They have brought such classics as “The Man With the Red Face” by Laurent Garnier, “Think Twice” by Henrik Schwarz, “Acamar” by Frankey & Sandrino, “Rej” by Ame and “Kerberos” by Stephan Bodzin and Marc Romboy to hordes of people in town squares everywhere, with an echo and intensity that somehow make these clubbing jewels even more sexy and magical than the originals.

And I couldn’t be happier to go and see them. My childhood dreams were of the city suddenly transforming into a party with the band playing my favourite songs; as an adult, I rejoice whenever a touch of the sacred is conferred upon the holy ceremony of techno, which has given me so much in these hard years. Can you hear the trumpets? And the xylophones? And the drums?
This is the soundtrack to our Land of Toys and we are Pinocchio, always swearing that this weekend will be the last, but never quite managing to betray our love for the music. Meute will help us keep our secret a little longer.