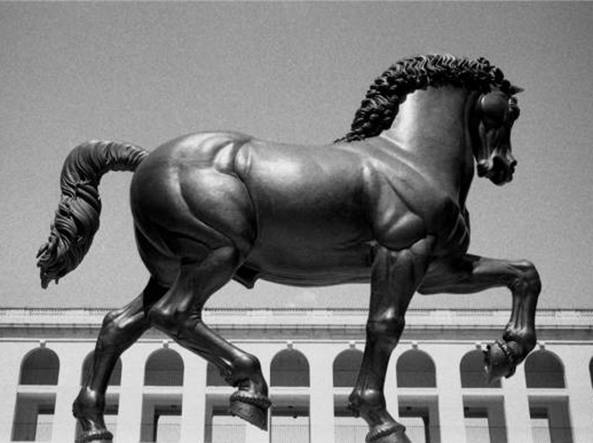 The Hippodrome always makes me think of strange sweaty men who would bet literally anything, even their wives. If they were to remake classic film “Febbre da Cavallo” now, however, I imagine it would be a different, more elegant film entirely: entrepreneurs defending their heritage, start-uppers betting on the future, Luxy-addicts (that’s Tinder for the rich), influencers with 30,000 bought followers and the social editors of golf or boat magazines.

Tonight will be even more fun than that. There’s no betting but 13 new specimens of Leonardo’s horse on display, as revisited by 13 internationally renowned designers ranging from Antonio Marras to the Analogia Project studio, via Marcelo Burlon. The latter will be the star of the party, of course, and there’s also a top-secret special guest (spoiler: they’re a friend of Marcelo’s, but also of Guè Pequeno’s), while Lele Sacchi will act as master of ceremonies.

This initiative is called the Leonardo Horse Project and it celebrates five hundred years since the death of Leonardo Da Vinci, reminding the Milanese of one of the artist’s most magnificent works. Little known fact: the horse only arrived at the Hippodrome in 1999 after a passionate Renaissance art fan from America managed to have it completed.