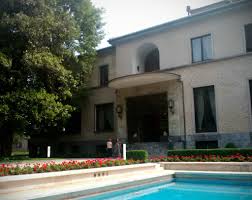 I went in that garden for the first time during the night of the 7th July 1962 to celebrate what I thought to be the most wonderful victory of all time. I was in Milan from a few months, I was 34, had an Austin Mini Countryman English green steering wheel on the right side and – above al – my sweet Fanny on my side, beauty as never before, with a white miniskirt, the yellow ribbon in her hairs and two tennis shoes of canvas which risked to get stained at every step. With the rackets in the trunk, we were looking for a tennis court. We went in café behind via Mozart and we had a lemonade, when the radio broke the news: “the Australian tennis player Rod Laver beat the surprising Martin Mulligan with a net score of 6-2, 6-2, 6-1, in the Centre Court of Wimbledon and he was awarded by the queen Elizabeth II the trophy of Great Britain Open Champion.” We didn’t already know that Rod Laver was going to win his first Grand Slam that year. We played our “open” behind that wall in via Mozart, around two o’clock in the night. We climbed over the wall carefully, with the Donnay rackets on our shoulders, and we played no more than a “game”. The full moon, the softness of the lawn and the sweet scents of Villa Necchi Campiglio’s garden made all the rest.

Ad could not be loaded.
Villa Necchi Campiglio