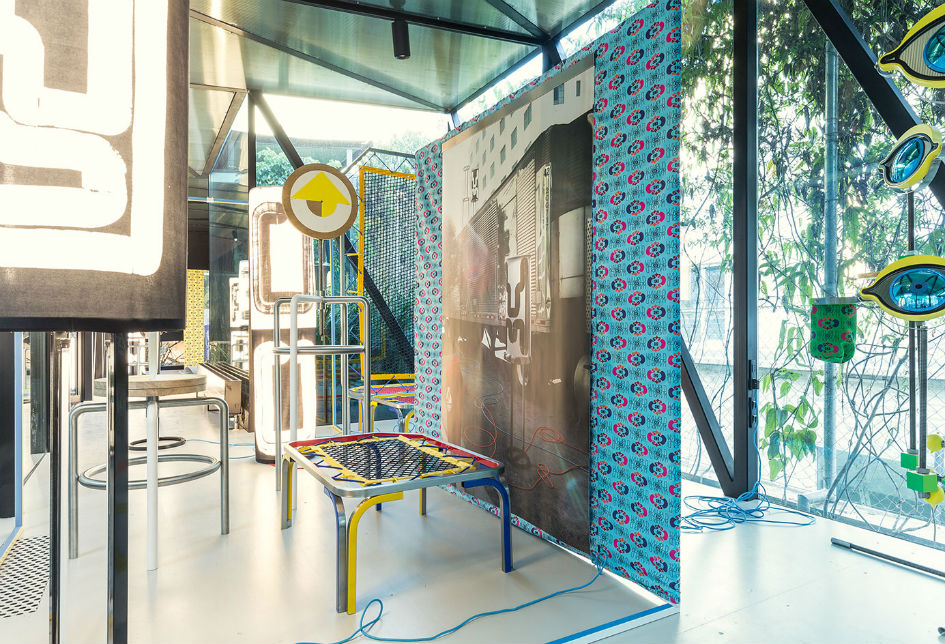 Writing a list of the best Fuorisalone exhibitions is a monumental task because it requires trawling through databases that were built back in the Commodore 16 era or thereabouts, magazines yellowed with time (at least, we hope its time) and online archives with no punctuation or line spacing. We must be honest and say that we didn’t actually publish some of the following selection (only some!) in Zero at the time, because the Fuorisalone is a cruel beast and there are no certainties: something that was good one year might be boring the next and truly awful the one after. It is impossible to guess which exhibitions will be the exhibitions to end all exhibitions, if you catch our drift.

2005 Domus Circular – G. Meazza Stadium
The future of contemporary audio-visual art was shaped at San Siro, thanks to Stefano Boeri then editor of Domus. The choreography, usually reserved for the die-hard fans, was entrusted to Matthew Barney, Arto Lindsay, Jimmie Durham, Alejandro Jodorowsky and other star players. And there was dancing down in the garages in the meantime.

An experiential overdose (see cover photo): getting lost among clouds of gin tonic – described by Guixé as “an artificial meteorological phenomenon based on atmospheric engineering” – only to dissolve into Bless N°29, a collage of wallpaper to move through. Fluid space, futuristic labyrinth and iconographic kaleidoscope.

2007 Design Academy Eindhoven – Museo Minguzzi
The Dutch do it better: while Beatrice’s subjects occupied the strategic areas of the city, the younger lot – recently graduated or ex-students – presented an anthology of work at the Museo Minguzzi. The characteristics were a census, a new dam that stems and confines a flow of creativity and design. Dreams always precede invention.

This exhibition went down in history not so much for the installation which combined futurism with the Nike aesthetic, but for the launch of the legendary “Him” and “Her” chairs by Casamania, with their sculpted bums.

Isola’s gentrified fate was still not sealed and, despite numerous attempts, the “Isola Design District” just wouldn’t take off. It’s a veritable brand by now of course. But back then, Droog had chosen a garage in a tucked-away street, Via Alserio, to host the amazing House of Furniture Parts by Studio Makkink & Bey. A mini-house/room made of plywood, with pieces of chairs, tables and stools cut into the walls (with CNC), waiting to be assembled: container and contents at the same time.

2010 Quali cose siamo – Triennale Design Museum 3
Never had the TDM been so surprising and exciting. Alessandro Mendini surprised both fans and detractors with an extraordinarily intelligent flow of many objects and work. All selected and narrated with an unrivalled clarity, agility and – above all – poetry that was miles away from his usual style. Gormiti in pole position.

The Moroso Showroom on Via Pontaccio is the most interesting place during the Salone. In 2011, the lunar atmosphere of this installation by Tokujin Yoshioka, achieved with mist (alcohol-free this time) and beams of light among which the Moon armchairs floated, sent the population of Brera into raptures.

2012 Librocielo – Biblioteca Pinacoteca Accademia Ambrosiana
A visionary project by Attilio Stocchi: a nocturnal, sound and light landscape created from references and the chatter of books from the Biblioteca Ambrosiana, with an unexpected homage to ancient Mediolanum. Goosebumps.

Design through the eyes of Ramak Fazel, globally acclaimed Iranian photographer who successfully became part of the lives and artistic and human contexts of the great names of design. Posed and candid shots of Sottsass, Toyo Ito, Magistretti, Holl, Zanuso, Starck, Nouvel, Fuksas and Irvine among others.

One of the most exciting appointments ever at the Fuorisalone: a little design circus by designer Maarten Baas in the ex-Sanremo garage in the new 5Vie district.

2016 M/Maison by M/M Paris – Plusdesign
The experimental cornerstone of Ventura Lambrate, the unmissable Plusdesign by Caputo and Martinazzoli, expanded into the courtyard of Via Ventura 6, where Parisian duo M/M (Mathias Augustyniak and Michael Amzalag, legendary graphic designers), the artists in residence (including Amalgamma from London, Jeongseob Kim from Korea and Nina Van Bart) and the ever-present Aart Van Asseldonk and Dirk Vander Kooij would all be exhibiting, as well as objects produced by Lucas Munoz, Duccio Maria Gambi and Canedicoda, and into Via Ventura XV, where we saw the famous Columbian Pico Sound Systems we had been expecting for months.

The best Fuorisalone parties from 2005 to today
Fuorisalone: una storia fatta di storie
Food (and drink) design in Milan: a vehicle for society and conviviality, especially when the alcohol is flowing
Videogames: design without borders

The best Fuorisalone parties from 2005 to today