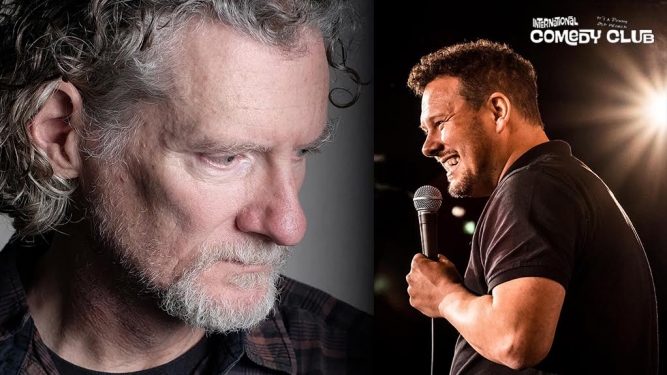 The 13th year of international stand up comedy club culture in Switzerland begins with a dynamic Anglo-American comedy duo in the shape of Dave Fulton, on his fourth appearance here (his first in 2008). Not afraid to pull punches in his observations, with a deceptively laid back stage manner that disguises a raw aggression. Un-missable comedy from one of the most dynamic and innovative comedians on the comedy circuit.

Alongside him, making his first appearance on an International Comedy Club Tour, is Maff Brown, who began performing stand-up comedy in November 2005. He is the founder and resident MC for Outside the Box, and is responsible for bringing comedians such as Jimmy Carr, Lenny Henry and Robin Williams to the club. He has done TV warm up for ITV, BBC and SKY and has written on BBC shows ‘Mock The Week’ & ‘Shooting Stars’

‘Brilliant stand up, great material’ – Bill Bailey
‘Jokes fall out of him like gold coins from a pirate’s chest’ – Frank Skinner
‘The love child of Leo Sayer and a performing seal.’ -Jack Dee