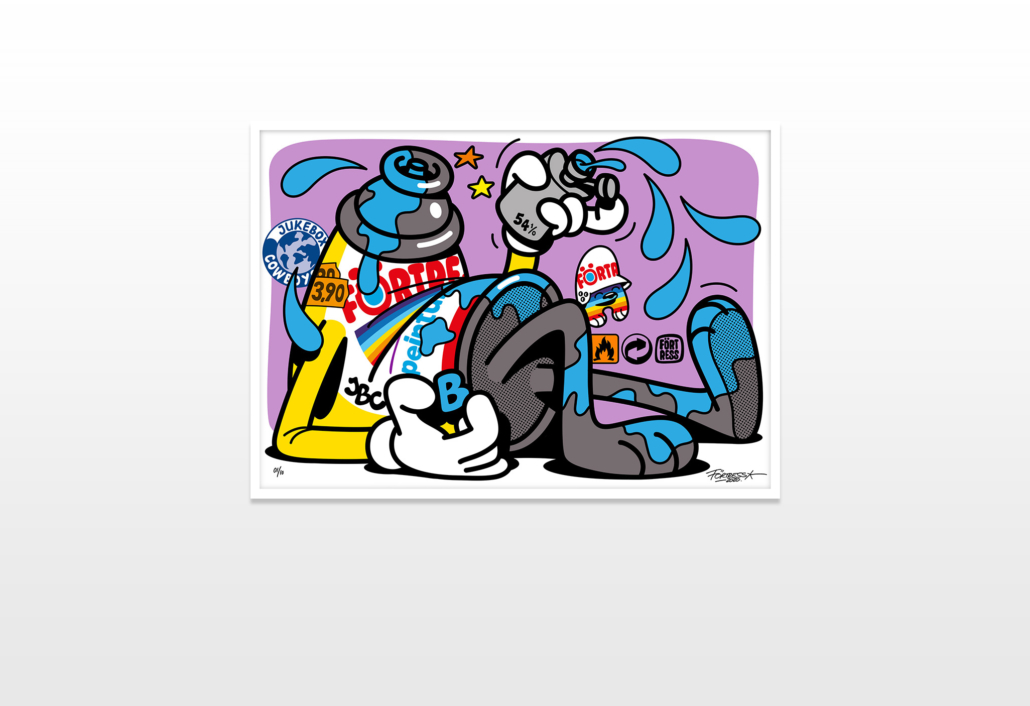 Well known for his Teddy Troopers artist Flying Förtress is back in Zurich! Flying Förtress is a talented graphic artist and illustrator, mastering several techniques, mixing seriousness and comical elements, always instinctively avoiding bad taste. He is subtle in the subjects’ representation too. His purpose being to make people smile, one can follow his art by its humoristic trace.

The title of the series Rasselbande II derives from a painting with the same name which was exhibited at the Kolly Gallery back in 2015. The painting that was exhibited at Flying Förtress’ solo show entitled Urban Insignia represented a so called „Rasselbande“, German for „caboodle“. The artist associates his own and real-life caboodle to it. Therefore, he assigns each of them an individual attribute, such as, a pet, various tools as well as a pocket flask. Being part of a social environment is common ground in the graffiti tradition, so every region or district has its own „gang“. Not only social environment provides a feeling of togetherness but also security and strength.

In Flying Fortress’ current series each of them is elaborated to a single character. Each one follows his own path. This gang experiences a time of individuality rather than collectivity. Aesthetically the pieces of Förtress demonstrate various vintage, traditional spray can designs and a lot of childish coolness. Flying Förtress is well known for his iconic cartoon like characters and styles.

Förtress is flying between the graphic and the graffiti world, between the small and the big sizes, between the silkscreens and the tags. Most of all, the German artist is known for his troopers. His logo represents an cute bear illustration on both of his paws. He seems torn between the cuddly toy and the aggressive animal effigy. Frequently the trooper wears a military German helmet symbolizing the second world war. The purpose of it is to preserve the beauty of the country‘s graphic art in the 39-45‘, leaving aside its contents of course. The artist gets inspired where one could think it‘s all negative. His humorous soldiers are joyful without being grotesque. He amuses himself with variations of the latter, always re-using the basic elements but changing theme or figure. In that way a trooper will transform itself into a pink panther or a Homer Simpson, everything being perfectly adapted to the mix of both characters.