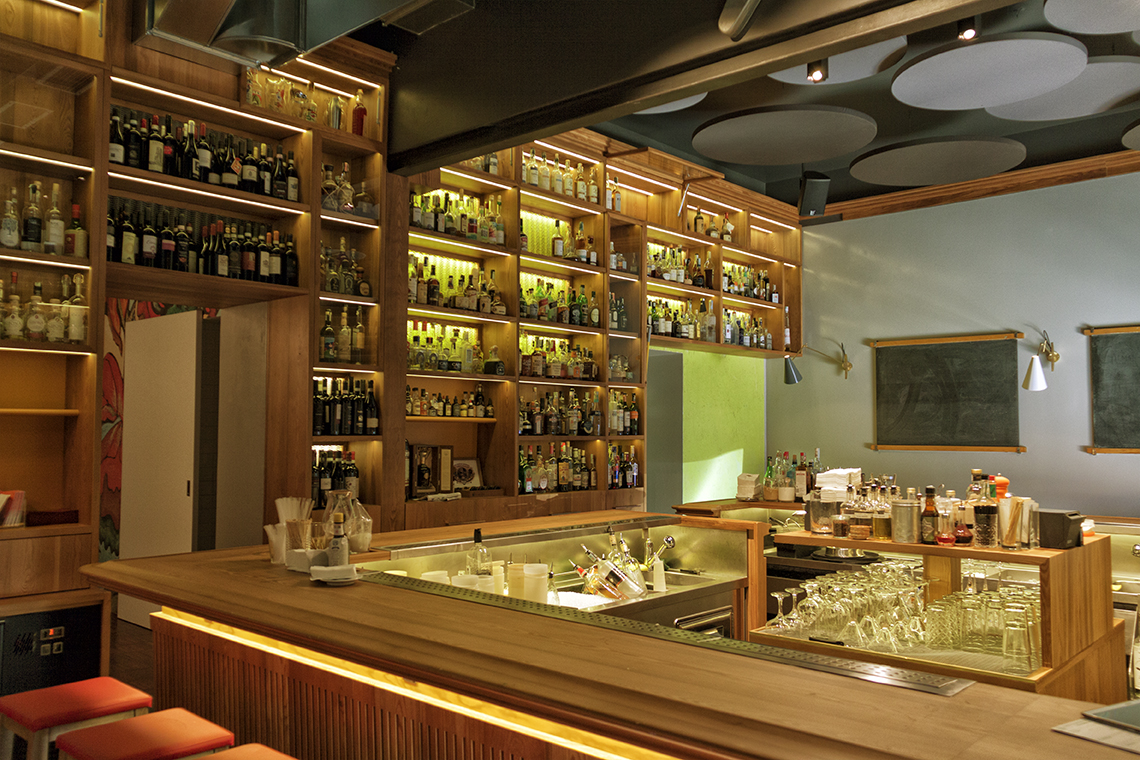 “We don’t accept bookings” was written in the first days after Rita’s opening on their brilliant Facebook page, the only timeline of a venue worth following if you feel like having some fun – in my personal morning press review it’s the second one after that of Lercio.

Now bookings are accepted only for small groups: the new restyling of the venue could be summarized here. Because Edo eand Luca have decided to put the bar back in the middle of everything, just like back in 2002, only now the Rita is no longer a corridor and the wooden bar (wood at last, not carbon, iron, plastic or human skin) it has taken the form of a letter (and also a dot) G: a choice made for the comfort of those guests who hate birthday tables in a cocktail bar and love to sit at the stools face to face with bartenders, maybe charging their mobile phones thanks to the new USB sockets (and hanging their jackets on the side hook), chatting without problems thanks to the ceiling panels. The bookcase (always made of wood) in front of the counter is very nice, full of precious bottles; the “standard” ones and all the gin, this way, they are available to bartenders without the need to use the famous telescopic pole (or extendable stick as you wish). Along the walls there are two red leather sofas (with small tables) reminiscent of the style of luxury motorboats, already inspiring the Rita logo (see “Riva”); there is also a private table between the two bathrooms which have been completely redone, one white and one black. Even in the outdoor area there are fewer tables and not for large groups (remember the comfort?). The new list is instead a small tabloid of 4 pages entitled “Waiter of the Evening”: it contains surrealistically alcoholic news and some drinks that we didn’t delay to order such as Super Nacho (mezcal, cucumber, cumin syrup, lime, hot pink pepper soda); Mezzo Mezzo e Mezzo (Vermouth del Professore, Mezzoemezzo, grappa); Smoke on the water (Campari, Averna, pineapple soda and Lapsang Souchong tea). The others are worth telling at the counter.

Ultimately, after being the forerunner of the new era of the Milanese aperitif, the Rita is back on her feet again and reopens to the conscious drinker, still claiming her classification as the number 1 place to drink in the city. But the news doesn’t end there: have you already heard about the new restaurant? On 12/12/2002 he opened a bar destined to become the reference point for drinking culture in Milan. It’s easy to say now, but already at the time the potential was all seen – pull out the Zero of October 2003 if you are a collector!, and patience (or better) if the Rita was just a corridor “with more bottles than Christians”. There were excellent clues such as the care in the products and in the making of the cocktails – just think of the gin zen (freshly mashed ginger, gin, lime and soda, crushed ice), one of the most imitated drinks in town that was invented here -, the absence of the aperitif buffet – replaced with increasingly tasty canapés (not yet called finger food) -, an ideal food menu to accompany drinks – Masseroni butcher’s burgers on everything, even if the new proposals are making the Rita also a restaurant. Have you ever tried chicken wings with Coca-Cola, lime and chilli? Let’s talk about it! But if it’s true that a place is mainly made by the public, it must be said that Edoardo Nono, Gianluca Chiaruttini and all the others were very good at conquering it with constancy, enthusiasm and continuous surprises (like the consistent restyling of summer 2016, the year in which Edo and Luca decided that a cocktail bar is above all the counter), turning the Rita into the place to go when you want to drink seriously. To be attended for a loud but conscious hangover.

Article by Simone Muzza. All the photos are by Raul Colombi

Ad could not be loaded.
Rita & Cocktails